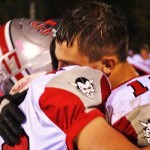 Michael Ferns is a high school senior in St. Clairsville, Ohio and a running back for the football team. He has a scholarship to play at the University of Michigan next year . . . and he has 11 touchdowns this season. (–St. Clairsville is 130 miles south of Cleveland.)

Two Fridays ago, in the fourth quarter of a game that St. Clairsville won 56-27, Michael got the ball and seemed to be headed for his twelfth touchdown. He ran 52 yards down the sideline, with no one on the other team in position to stop him.

But then Michael slowed down and STEPPED out of bounds at the one-yard line. The referees were so surprised that they initially signaled for a touchdown. But Michael and his teammates successfully argued that he DIDN’T really score. Here’s why . . .

On the next play, the team gave the ball . . . and the touchdown . . . to Logan Thompson, a freshman who rarely gets to play. Logan’s father died two days before the game . . . and the team decided to give him a chance to score a touchdown for his dad.